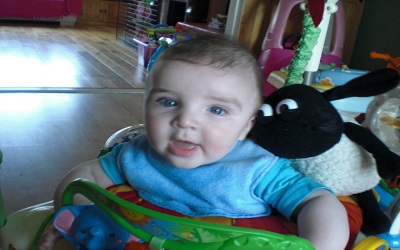 I have been asked so many times recently about Conor and how we found out about him having autism. I usually give the good version and say we found out when he was less than 18 months old and at that time he was the youngest in our county to ever be diagnosed. It is all true but what led to that diagnosis has been some of the hardest, most painful years of my life. I decided to finally write down how it all happened and I may come back later to add more to it as I don’t think I could mentally cope with remembering all that happened and all we have been through, all at once, so for now I have written my first draft for you to read. It will be in two parts as it is a long story. I’ll post the second part in a week or so , once I have built up the courage to write it. So for now here is Part 1 of Conor’s Autism.

If I could go back in time to the day before Conor was born I would in an instant. I would give myself the biggest hug and tell me it would all be alright, that it was going to be an incredibly painful few years ahead, that I would spend many nights bawling my eyes out with worry, stress and loneliness but in the end it would be alright. I would tell the me of almost 6 years ago that the little boy I loved so much would be born with Special Needs and to record every second of his little life as someday soon he would stop to talk and he would leave to go into his own little world but he would come back to me one day.

I still cry my eyes out even now that I didn’t record Conor speaking as I remember loving the sound of his voice saying ‘Mama’, he didn’t say it long before all his words went, but I just wish with all my heart now I had a recording of his lovely voice. I never expected that I wouldn’t hear his voice again, that I would lose my lovely boy and that we would have to fight to get him to come back into our world. 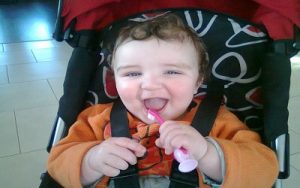 I remember the day Conor was born as if it were yesterday, because from that day everything changed for good. I feel terrible heartache still that I didn’t realize from the day he first entered our world that my gorgeous most lovely boy had Special Needs. I knew something was amiss but I could never have imagined for a second what the reality was.  I always wanted to have a little boy of my own to love, to kiss and hold, my very own little boy who would grow up someday leaving home with a piece of my heart always.

I was in love with Conor from the very moment I knew he was growing in my belly. I would dream at night of how he would look, all the lovely things he and Hailey (his big sister) would do together, how I would bring my special boy and best girl out to do lovely things together. We would bake, paint, talk, read, play, do all the things you plan to do when you have little people to love and kiss goodnight.

Conor was born on the 8th of March 2010 in the middle of the night. I loved him; his chubby cheeks, his tiny hands, his pointy toes, I loved every single inch of my lovely baby boy. I remember kissing every single part of him, kissing all my love into him, hoping he knew as I held him tight I loved him now and forever more. I promised him that night I would always be there for him, love him, mind him, help him, protect him.

I feel such guilt now that I didn’t live up to those promises, I should have known he had Special Needs that first night, that he was suffering. I didn’t realize when Conor didn’t sleep that first night that it would be over 2 and a half years before he would sleep again, once he had medication. I didn’t realize what was about to happen, I thought he would sleep once he was settled at home, yet what followed were the hardest, most heart breaking years of my life so far; the most hard to talk about time of my life.

From that first night with my beautiful Conor in my arms, he never slept again until he was prescribed medication for children with Special Needs when he was 2 and a half. He screamed all day and all night, not a baby cry but an actual unusual high-pitched scream I know now to be associated with Autism. The only way to stop the screaming was to hold him, so I did. I held him, rocked him, kissed him, hugged him, loved him; did everything I knew how to do to help him. It wasn’t enough. He never slept in his special Moses Basket I picked out for him, never slept under his special pirate blankets, never, not once. With a breaking heart I gave them away, hoping another little baby boy would feel the love I had felt that day I picked them out for my gorgeous Conor.

In the years that followed the only way to help Conor sleep was to push him around our house all night long in a pushchair. We would take it turns to stay up all night pushing him around the kitchen and living room all night long. I know now it helped him sleep because he has Sensory Processing Disorder and had severe acid reflux, lying down caused him actual physical pain. When pushing him in his pushchair wasn’t enough I would drive through the night. Motion helped him sleep so I drove. I ended up in Galway many nights driving around the city as people my age happily lived a life that seemed like a ghost to me now. I remember driving out to Salthill wondering why my little gorgeous boy could not sleep, why I couldn’t help him.

I couldn’t stop the car as once it would stop he would start screaming and vomiting so there were nights I contemplated driving through red lights to stop the screaming, the vomiting. During those years I have driven through every county in the West, just driving to stop the screaming to help my lovely boy sleep. I was so so tired but the alternative was if I didn’t take him out of the house and drive, Hailey would be awake and my husband too. So I drove and cried my eyes out wishing for it all to end.

During that time from birth to when he was eventually diagnosed he was unable to drink his formula milk or later eat at all. He was so particular he would only drink out of one brand of bottle and if for any reason I could not get my hands on that bottle he would not drink at all, not one ounce. So I always had a steady supply in a press of the bottles he would tolerate, the specialist prescription formula he could drink. He eventually stopped eating at all for months at a time so had to be put on to a specialist formula drink normally given to seriously malnourished children.

Conor spent most of his baby years in and out of hospital as the doctors could not tell us what was wrong why he couldn’t sleep, why he couldn’t eat, why he vomited constantly, why he couldn’t tolerate anyone touching him but myself and my husband. We had all the “whys” and they had none of the answers.

He has extreme anxiety still related to his Autism since his birth. As a young baby nobody could visit our house and we couldn’t bring Conor anywhere as he just could not tolerate the unexpected, a new voice, a new face terrified him and the screaming/vomiting would start. It could take hours to calm him down, until he would eventually stop exhausted.

We were all exhausted, not sleeping for years had a huge effect on all of us. I had regular black outs with the stress, I would be pushing Conor around the house at night then feel very weak and sit on the floor in case I fainted and would be woken by Conor screaming so would get up and start pushing him again. I just remember having a constant sick feeling in my stomach; a bit like acid but more like a bad pain, the kind you get when you get an awful shock suddenly.

All my hair fell out on one side with the stress so I have had to keep it tied up as it never seemed to grow back properly later. I have the worst memory now, I always think it is from being constantly exhausted as Conor can still stay awake all night; for nights on end. My eyes are constantly sore from being dry and tired. I survive on Tea now to keep me going.

Conor couldn’t sit up or hold a bottle until his first birthday, didn’t stand or walk until he was almost 2. He still can’t really feed himself so we help him. He is still so particular about food and his drinks that we always have to have a stock of the same water bottles in the press along with the same food brands he will eat and the same cutlery he will let us use.

He spoke for a little while after his first birthday, he could say mama, dada, baba and funnily bopum dopum; which I know isn’t a word but I loved the sound of his voice because he was saying something. I so wish now I had recorded him, I would do absolutely anything to help him talk. If I ever heard him say mama again I cannot tell you what that would do to me.

He has so many problems I could write forever to tell you all about them but I try to not think about that time too much as it overwhelms me now when I remember all we have been through together and all that may still lie ahead. I love Conor with every single part of my being and as hard as the last few years have been on us I cannot begin to imagine what they have been like for him personally. I could cry forever when I think of how it has been so hard for him……

God, I love you Conor and you make me so proud every single day of your life with your bravery in all you have faced and overcome. You do and you will always make so proud to be your mammy.xxxx

I am a married mammy of three gorgeous children; Hailey (7), Conor (5) and Jack (1). Before I had children I had spent many years studying the Law, later beginning my training to become a Solicitor. Once my lovely Conor was born I had to give up my Law Career to become his full time Carer as he requires 24 Hour Care and attention. I chose Law as a career as I wanted to help people, now through loving Hailey, Conor and Jack, learning about special needs and what it means to each of them; I hope to be able to help others walking the same road as we are. 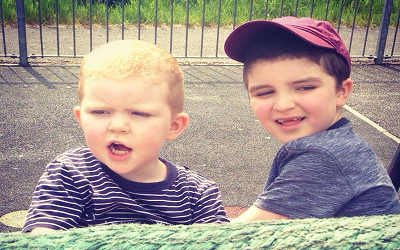 Autism knocks on the door. 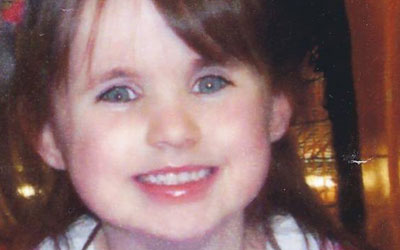